This post is part one in a three part series on the challenges of improving a production machine learning system. Find part two here and part three here.

Suppose you have been hired to apply state of the art machine learning technology to improve the Foo vs Bar classifier at FooBar International. Foo vs Bar classification is a critical business need for FooBar International, and the company has been using a simple system based on a decade-old machine learning technology to solve this problem for the last several years.

As a machine learning expert, you are shocked that FooBar International hasn’t gotten around to modernizing this system, and you are confident that replacing the Foo vs Bar classifier with the latest machine learning hotness will dramatically improve system performance. You pull the Foo vs Bar training data into a notebook, spend a few weeks experimenting with features and model architectures, and soon see a small increase in performance on the holdout set.

This is a familiar story that anybody who has built machine learning models at a large company will recognize. Making measurable improvements to a mature machine learning system is extremely difficult. In this post, we will explore why.

Machine learning systems are extremely complex, and have a frustrating ability to erode abstractions between software components. This presents a wide array of challenges to the kind of iterative development that is essential for ML success.

Most software systems carefully control which layers need to communicate with each other and which data needs to be exposed along each layer boundary. It is quite common for a new machine learning system to require breaking existing abstractions and connecting layers that were designed as separate.

Modifying software architecture and abstractions to support new products is common and healthy. However, it is difficult to execute these kinds of changes effectively before we have a clear understanding of what the next stable state of our software architecture should be. Unfortunately, this is exactly the case with machine learning improvements. Until we can test the machine learning system in production, we cannot determine how much value it will bring. This kind of catch-22 can dramatically slow down development and experimentation agility. In larger organizations where such a refactor may require multiple teams to prioritize the changes, this can lead to a state of paralysis.

In some situations it may be possible to build a modified version of the new machine learning system that operates within the constraints of the current software abstractions. For example, perhaps the fancy new model can execute in a batch job rather than in realtime. However, it is usually difficult to estimate how much this kind of modified design will handicap model performance. It is quite common for a state-of-the-art machine learning system that is deployed under such a handicap to underperform a simpler system that has been optimized for the abstractions of the software system it lives within.

In any of these scenarios, our model’s performance on labeled data presents only a skewed view of how the model performs on all traffic. There are some techniques like importance sampling that can minimize the impact of this bias, but these strategies can be quite hard to tune. 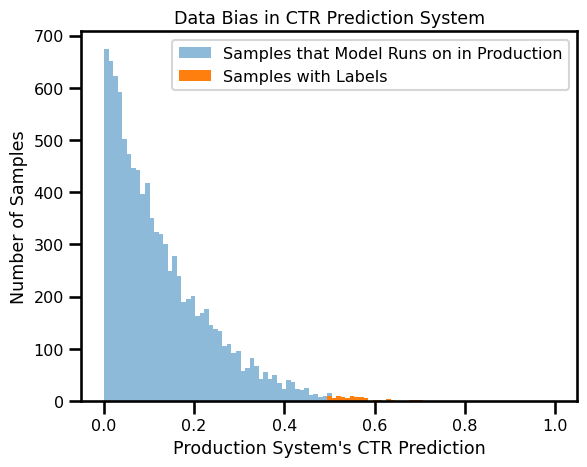 To make matters worse, it is quite common for data distributions to shift over time. In some circumstances these shifts can happen quite rapidly: it is not uncommon for models at large social networking companies to go stale within hours (example).

The combination of these effects can make it extremely difficult to draw conclusions about model performance improvements from offline results. In practice online A/B testing is usually required to draw more reliable conclusions by tracking metrics like revenue and report rate over all traffic. However, this substantially increases the iteration time required to make model improvements, which slows down progress.

In many circumstances the labeled data that our model receives is dependent on the predictions it generates. Some classic examples of this situation include:

Furthermore, labeled data is not the only kind of feedback loop that can plague machine learning systems. It is also quite common for the features that a machine learning system consumes to depend on its predictions. For example, a common feature in recommendation systems is the number of previous times that a user has seen content of type X. This count will be heavily influenced by how biased the recommendation system is towards recommending content of type X.

This is a particularly insidious kind of distribution mismatch, since it can give rise to extremely complicated system dynamics. 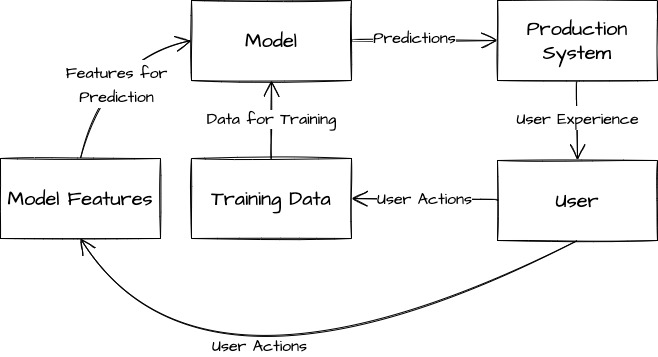 We can sometimes minimize the impact of feedback loops by deriving training data from specialized pipelines that do not use the machine learning model directly. However, this strategy can be difficult to scale, can sometimes hurt model performance by preventing the model from learning from its mistakes, and does not directly address the influence of feedback loops on model features.

In production machine learning systems seemingly independent components often exhibit hidden tight couplings. This can make experimentation challenging. Changing one system without changing the other will cause performance to degrade, and changing both systems at the same time is often error prone and coordination intensive. Some examples include:

When designing or working with an ML system, it is extremely important to be aware of the tight couplings that exist. In certain situations it can be beneficial to introduce redundant components in a system in order to relax the number of components that are tightly coupled.

That’s all for now. In our next post we will explore some of the challenges of adding new features or improving existing features in a machine learning system.