Welcome to part 2 of the Musical TensorFlow series! In the last post, we built an RBM in TensorFlow for making short pieces of music. Today, we’re going to learn how to compose longer and more complex musical pieces with a more involved model: the RNN-RBM.

To warm you up, here’s an example of music that this network created:

A Recurrent Neural Network is a neural network architecture that can handle sequences of vectors. This makes it perfect for working with temporal data. For example, RNNs are excellent at tasks such as predicting the next word in a sentence or forecasting a time series.

In essence, an RNN is a sequence of neural network units where each unit \(u_t\) takes input from both \(u_{t-1}\) and data vector \(v_t\) and produces an output. Today most Recurrent Neural Networks utilize an architecture called Long Short Term Memory (LSTM), but for simplicity’s sake the RNN-RBM that we’ll make music with today uses a vanilla RNN.

If you haven’t worked with RNN’s before, Andrej Karpathy’s The Unreasonable Effectiveness of Recurrent Neural Networks is a must read. The RNN tutorial at wild-ml is great as well.

The RNN-RBM was introduced in Modeling Temporal Dependencies in High-Dimensional Sequences: Application to Polyphonic Music Generation and Transcription (Boulanger-Lewandowski 2012). Like the RBM, the RNN-RBM is an unsupervised generative model. This means that the objective of the algorithm is to directly model the probability distribution of an unlabeled data set (in this case, music).

We can think of the RNN-RBM as a series of Restricted Boltzmann Machines whose parameters are determined by an RNN. As a reminder, the RBM is a neural network with 2 layers, the visible layer and the hidden layer. Each visible node is connected to each hidden node (and vice versa), but there are no visible-visible or hidden-hidden connections. The parameters of the RBM are the weight matrix \(W\) and the bias vectors \(bh\) and \(bv\). We saw in the last post that an RBM is capable of modeling a complex and high dimensional probability distribution from which we can generate musical notes. In the RNN-RBM, the RNN hidden units communicate information about the chord being played or the mood of the song to the RBMs. This information conditions the RBM probability distributions, so that the network can model the way that notes change over the course of a song.

One caveat: The RNN-RBM that I will describe below is not exactly identical to the one described in Boulanger-Lewandowski 2012. I’ve modified the model slightly to produce what I believe to be more pleasant music. All of my changes are superficial however, and the basic architecture of the model remains the same. All of the RBMs share the same weight matrix, and only the hidden and visible bias vectors are determined by the outputs of \(u_t\). With this convention, the role of the RBM weight matrix is to specify a consistent prior on all of the RBM distributions (the general structure of music), and the role of the bias vectors is to communicate temporal information (the current state of the song).

The parameters of the model are the following: 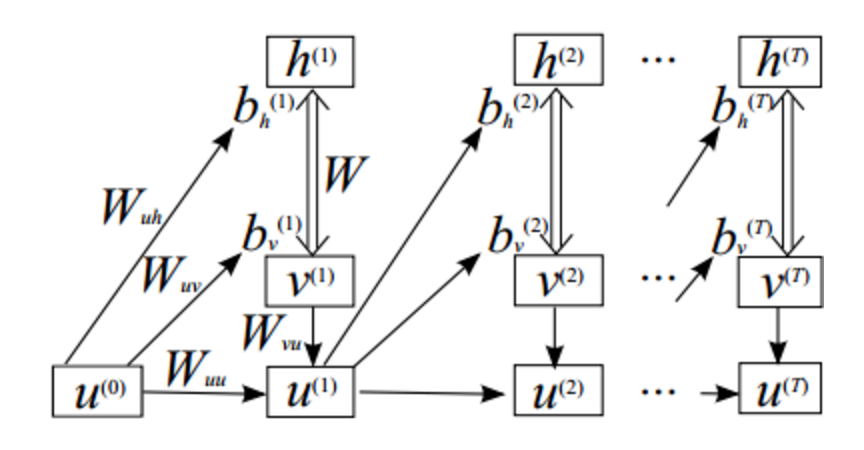 Note: Before training the RNN-RBM, it is helpful to initialize \(W\), \(bh\), and \(bv\) by training an RBM on the dataset, according to the procedure specified in the previous post.

To train the RNN-RBM, we repeat the following procedure:

To use the trained network to generate a sequence, we initialize an empty generated_music array and repeat the same steps as above, with some simple changes. We replace steps 2 and 3 with:

A folk song from the Nottingham database: 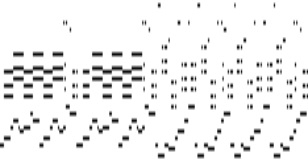 A portion of the song “Fix You” by Coldplay. 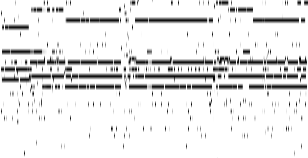 Here is some music that was produced by training the RNN-RBM on a small dataset of pop music midi files.

In Boulanger-Lewandowski 2012, each RBM only generates one timestep, but I’ve found that allowing each RBM to generate 5 or more timesteps actually produces more interesting music. You can see the specifics in the code below.

All of the RNN-RBM code is in this directory. If you’re not interested in going through the code and just want to make music, you can follow the instructions in the README.md.

Here is what you need to look at if you are interested in understanding and possibly improving on the code:

The basic RNN-RBM can generate music that sounds nice, but it struggles to produce anything with temporal structure beyond a few chords. This motivates some extensions to the model to better capture temporal dependencies. For example, the authors implement Hessian-Free optimization, an algorithm for efficiently performing 2nd order optimization. Another tool that is very useful for representing long term dependencies is the LSTM cell. It’s reasonable to suspect that converting the RNN cells to LSTM cells would improve the model’s ability to represent longer term patterns in the song or sequence, such as in this paper by Lyu et al.

Another way to increase the modelling power of the algorithm is to replace the RBM with a different model. The authors of Boulanger-Lewandowski 2012 replace the RBM with a neural autoregressive distribution estimator (NADE), which is a similar algorithm that models the data with a tractable distribution. Since the NADE is tractable, it doesn’t suffer from the gradient-approximation errors that contrastive divergence introduces. You can see here that the music generated by the RNN-NADE shows more local structure than the music generated by the RNN-RBM.

We can also replace the RBM with a Deep Belief Network, which is an unsupervised neural network architecture formed from multiple RBMs stacked on top of one another. Unlike RBMs, DBNs can take advantage of their multiple layers to form hierarchical representations of data. In this later paper from Vohra et al, the authors combine DBNs and LSTMs to model high dimensional temporal sequences and generate music that shows more complexity than the music generated by an RNN-RBM.

Thanks for joining me today to talk about making music in TensorFlow! If you enjoyed seeing how neural networks can learn how to be creative, you may enjoy some of these other incredible architecures: