I’m going to assume that you have a pretty good understanding of neural networks and backpropagation and are at least a little bit familiar with TensorFlow. If you haven’t used TensorFlow before, the tutorials are a good place to start.

Generative Models specify a probability distribution over a dataset of input vectors. For an unsupervised task, we form a model for \(P(x)\), where \(x\) is an input vector. For a supervised task, we form a model for \(P(x \vert y)\), where \(y\) is the label for \(x\). Like discriminative models, most generative models can be used for classification tasks. To perform classification with a generative model, we leverage the fact that if we know \(P(X \vert Y)\) and \(P(Y)\), we can use bayes rule to estimate \(P(Y \vert X)\).

Some good resources for learning about generative models include:

Unlike discriminative models, we can also use generative models to create synthetic data by directly sampling from the modelled probability distributions. I think that this is pretty sweet, and I’m going to prove it to you. But first, let’s talk about RBMs.

If you have never encountered RBMs before, they can be a little complex. I’m going to quickly review the details below, but if you want understand them more thoroughly, the following resources may be helpful:

The RBM is a neural network with 2 layers, the visible layer and the hidden layer. Each visible node is connected to each hidden node (and vice versa), but there are no visible-visible or hidden-hidden connections (the RBM is a complete bipartite graph). Since there are only 2 layers, we can fully describe a trained RBM with 3 parameters:

\(n_{visible}\) is the number of features in the input vectors. \(n_{hidden}\) is the size of the hidden layer. In this image we remove most of the edges for clarity.

Unlike most of the neural networks that you’ve probably seen before, RBMs are generative models that directly model the probability distribution of data and can be used for data augmentation and reconstruction. To sample from an RBM, we perform an algorithm known as Gibbs sampling. Essentially, this algorithm works like this:

At the end of the algorithm, the visible nodes will store the value of the sample.

Remember that an RBM describes a probability distribution. When we train an RBM, our goal is to find the values for its parameters that maximize the likelihood of our data being drawn from that distribution.

To do that, we use a very simple strategy:

The equations are straightforward:

This technique is known as Contrastive Divergence. If you want to learn more about CD, you can check out this excellent derivation.

In this tutorial we are going to use our RBM to generate short sequences of music. Our training data will be around a hundred midi files of popular songs. Midi is a format that directly encodes musical notes - you can think of midi files as sheet music for computers. You can play midi files or convert them to mp3 by using a tool such as GarageBand. Midi files encode events that a synthesizer would need to know about, such as Note-on, Note-off, Tempo changes, etc. For our purposes, we are interested in getting the following information from our midi files:

We can encode each song with a binary matrix with the following structure: 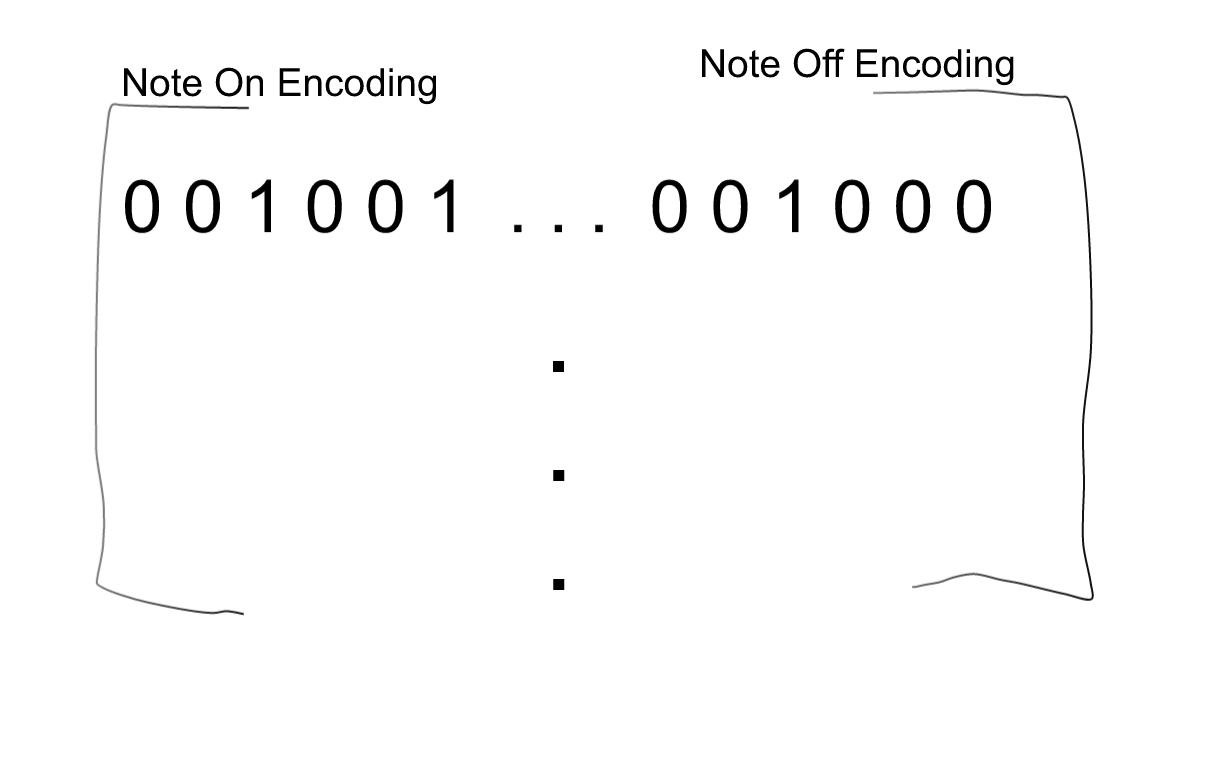 In the above encoding, each timestep is a single training example. If we reshape the matrix to concatenate multiple rows together, then we can represent multiple timesteps in a single data vector.

Converting midi files to and from these binary matrices is relatively simple, but there are a number of annoying edge cases. All of the code for reading and writing midi files is in the midi_manipulation.py file, which is heavily based on Daniel Johnson’s midi manipulation code. Midi files aren’t really the point of this post, but if you want to know more, the following libraries are pretty useful:

Now let’s get coding! In order for the code below to work, you need to put it in a directory with the following files:

For your convenience, all of the code is in this repository. Just follow the instructions in the README.md.

By altering the num_timesteps variable in the above code, we can make sequences of music of different lengths. Since each additional timestep increases the dimensionality of the vectors we are inputting to the model, we are limited to sequences of only a few seconds. In my next post, I’ll show how we can adapt this model to generate longer sequences of music.

I hoped you enjoyed this post about RBMs in TensorFlow! RBMs have a plethora of applications that are more useful than generating short sequences of music, but their real power comes when we build them into more complex models. For example, we can form Deep Belief Networks by stacking RBMs into multiple layers. Training a DBN is simple - we greedily train each RBM, and pass the mean activations of each trained RBM as input to the next layer. Unlike RBMs, DBNs can take advantage of deep learning to learn hierarchical features of the data.

In the next post, we’re going to talk about a different model that builds on the RBM - the RNN-RBM. This model is a sequence of RBMs, where the parameters of each RBM is determined by an Recurrent Neural Network. This architecture can model temporal dependencies, and we will use the model to generate much longer, more complex, and better-sounding musical pieces.